At monday (Xenia´s birthday) we went out early to avoid the crowded time on Corcovado and check if Cristo Redentor is still fine. So we took the ferry to Rio, walked to the Carioca station of the „Bonde“ and around 10 am we went up to Santa Teresa again. There, at „Largo dos Guimaraes“, it should be possible to take a bus up to the national park „Tijuca“. We asked a guy in he newspaper-shop if there´s a bus up to Corcovado, he just said „There is no bus.“ Of course after 4 weeks in brasil we know that asking anybody isn´t the best way to get useful information, so we just waited. After 10 mins the bus „007“ to „Silvestre“ arrived and the driver said „Corcovado? Sim.“ We paid 3,80 R$ each, sat down and enjoyed the ride up the mountains, ending at the gate to the national park.

The guard told us (written on his hand) the 2 options to get to Cristo:

Because it was already 30 degrees we decided to take the shuttle, got in, drove (or better raced) up and after we got out of the bus at the visitor-center a guy wanted to get the 60 R$ for the ride. CASH ONLY! We were confused , because even on streetmarkets, when you buy nice pasteis or caipirinha, you can pay by card, almost like in Sweden! So after some discussion (of course there´s no ATM at the visitor-center) he let us go (we told him he should have told us before) and we went to the ticket counter. 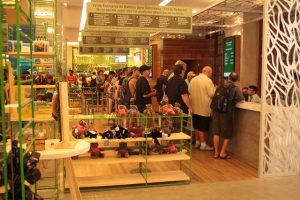 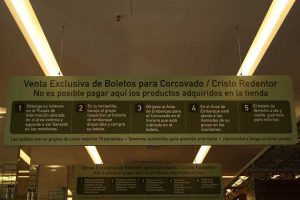 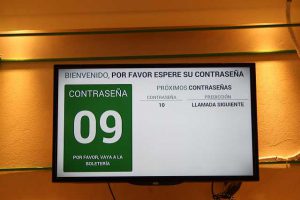 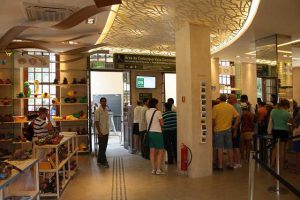 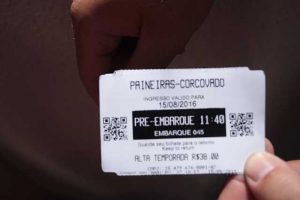 1. go though the first gate and wait in a queue to get your ticket read.(20 mins) in the sun.

2. wait in another queue to get through the metal-detector. (10 mins) in the sun.

3.go though the metal-detector and wait for the number on your ticket to get to the shuttlebus. (1,5h) In the sun. Without toilet, Together with 250 other people, supplied by 1 girl in a foodtruck with chips and water.. 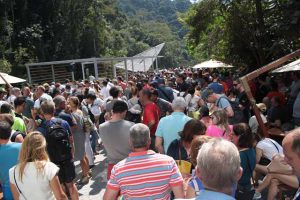 4.Pass though another gate with the number on your ticket, then wait in another queue for getting into the shuttlebus. (25 mins) In the sun. 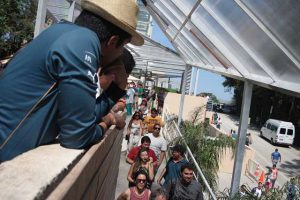 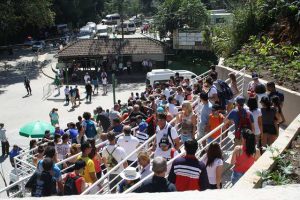 So after approx. 2,5h after waiting in the burning sun (even in brazilian winter) you can jump into the shuttlebus, drive 5 mins up the the top of the mountain, get out, first way to the snackbar, and what do they tell you? CASH ONLY! The souvenirshop directly next to it took VISA/MASTERCARD somehow -.-

We found some Reais in our pockets, got some water and food, and walked the last stairs up, already seeing the back of the biggest Art-Deco-statue of the world. And what can we say:

Although it was not perfectly clear this day you could see Niteroi, from Rio´s harbour to the sugarloaf, Leme, Copacabana, Ipanema, Leblon to Rocinha, the biggest and (now) one of the safe favelas in Rio…

Everything from a bird´s-view. Very impressive! After we took some selfies and tried to get nice shots (although it was really crowded up there) we went down by bus again (there´s also a train, but you have to pay extra if you came up by bus and want to go down by train) and, because we saw on a map there are some trails down to the city, we asked at the info-point where to enter this 2,5km-walkway through the jungle. The first answer was „there is no way to walk“. After we showed her a picture of the map 5 meters next to her office she said „Oh,yes, there is a trail, but you have to start at the top again, the part between visitors-center and top is closed while olympic games.“

So if you are at the top: there´s no map of the paths/trails.

And if you are at the visitors-center: there´s a map, but you have to get to the top first 😮

The queues were still full and we´d have to buy new tickets, so we decided to go down by bus. But hey, that´s only possible if you came up and payed! Taxis are not allowed, the trail is closed so the only option is to walk down the road with shuttlebusses flying nearby till we´d be at a cabstation -.-

Fortunately, after 2 kms we met an italian guy, who was taking a cab to Santa Teresa, we jumped in and got out at the lovely „Cafecito“ again. Time for cake and coffee!!

So: After all, the view is worth it, but AGAIN: organizing things with common sense is obviously very hard in brazil, even if it´s „one of the seven new wonders of the world“.

And that almost nobody spoke english is not even mentioned 😉

If you want to avoid most of this: 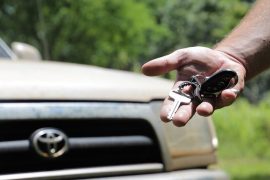 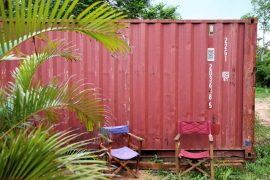 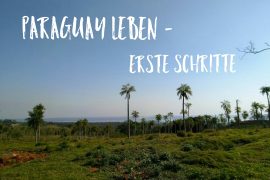